DVG President J.R. Wilson talks about the lead up to the first ever Stand Down on the Delta in 2015. Video is part of the Bay Area's Hometown Heroes series. 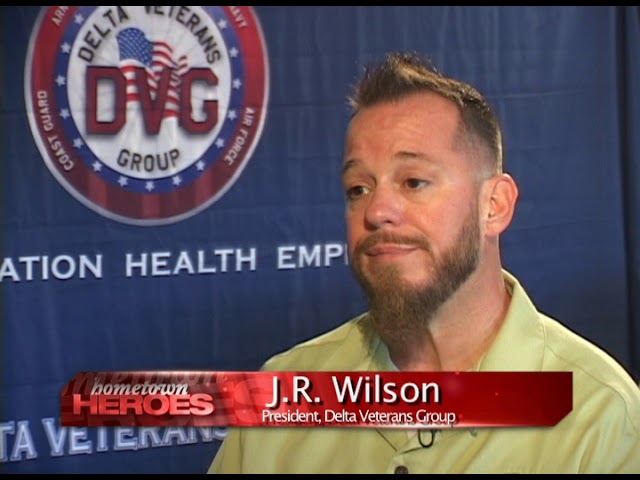 J.R.Wilson was born in Concord, CA in 1971 and raised in Antioch and Pittsburg.

Although his family did not have much growing up, J.R.'s Father always taught him to "leave things better than you found it". This message would live on through J.R. and his service to his community for years to come.

As a young man, J.R. worked as a paperboy for both the Pittsburg Post Dispatch and the Antioch Daily Ledger.  At 13 years old, he went door to door selling subscriptions to the respective companies' paper and the Oakland Tribune. He then went on to work for Straw Hat, Fry's, Savemart, and Raley's. At 17 years old, J.R. found himself homeless living on the streets of East Contra Costa County at night and working during the day before joining the U.S. Army.

Upon returning home to Contra Costa County, J.R. noticed an  increase in homelessness among our Veterans. He decided to take action and founded Delta Veterans Group in 2012 with the intent of bringing the first ever "Stand Down on the Delta" of its kind in Contra Costa County and our Veteran community. After three long years of planning, Stand Down on the Delta finally made its debut in September of 2015. Stand Down on the Delta 2015 brought in over 350 homeless and at-risk of becoming homeless Veterans and their families for four days of housing, employment, health, education, recovery, and legal services.

Currently J.R. is serving his community in a greater capacity. His endeavors include:

J.R. is also active in his local Rotary, Lions, Masons, and Elks groups.

Next Open Meeting for Stand  Down on the Delta is:

Hope to see you there!!

DVG was proud to bring the first homeless and at-risk of becoming homeless Veteran "Stand Down on the Delta" of its kind to Contra Costa County in September of 2015. Stand Down on the Delta was a four-day, three-night event in which Veterans were provided full medical treatments, court and legal services, DMV, Chaplain services, housing, addiction and mental health counseling, employment, and a myriad of other community services. During the event, Veterans were also provided with clothing, meals, showers, sleeping tents, and a safe place to "stand down" for the duration. The next Stand Down on the Delta will be held in September of 2021 at the Contra Costa County Fairgrounds located in Antioch, CA.